For the past few months I have been re-editing a book I wrote while we lived and ministered in Guatemala, so I haven't done a lot of blogging.
As I was thinking about the blog, I realized that one of the most powerful tools we have is to simply share our story.  So I thought I would share my story of how I became a believer in Jesus.
In the hopes that I don't bore you, I will try to shorten it.
Although I was raised in a home with believing parents, I was never taught about having a personal one-on-one relationship with Jesus Christ.

I was taught bible stories as a small child in Sunday school and as long as I remember I believed in God, but I never knew anything about the idea of becoming born-again.

My folks split up when I was seven, and both parents remarried in a relatively short period.  We soon moved with our mom and stepdad from Iowa to New Mexico, and then to Southern California and eventually to Northern California.

I was used to moving around because as a kid living in Iowa, I went to two different kindergartens in two different towns, one school for 1st grade in one town, another school for 2nd in another town, two schools for 3rd in two close by towns, the same school for 4th, then half of 5th in New Mexico, the other half of 5th in Southern  California, half of 6th in the same school in So. Cal., then the other half of 6th grade Northern California where we stayed for the next few years. Between my junior and senior year of high school, my brother and I moved back to Iowa to live with our dad.  Lots of moves as a kid, and so I learned to make friends quickly!
When I was 10, we lived in Long Beach, California, and one Sunday morning I got up and told my mother I was going to Sunday school.  We had not attended church anywhere there, but there was a church down the street near where I went to school.

When I arrived, they had children's service instead of Sunday school, and  the teacher had a display board with three hearts on it; a black heart, a red heart, and a white heart.  She explained that the black heart represented a heart covered by sin; the red heart was a heart that had been covered by the blood of Jesus; and finally the white heart was a heart that had been cleansed and made pure by the blood of Jesus.
She then asked if anyone wanted to ask Jesus into their heart to forgive them of their sin, and I raised my hand and said I do.  I do not remember her leading me in a "sinner's prayer," I just remember simply asking Jesus to come into my heart and forgive me of my sins.  The children gathered around me and laid hands on me as I prayed.
After that the teacher wanted my name and address but I was always taught not to give out that information to a stranger, so I didn't give her my address.

Soon, we moved to Northern California, and I never went back to that church.
When I was 13, my folks thought I should go through confirmation. Even though I really wasn't paying that much attention, the scriptures that were taught by the pastor stayed with me. I can also remember being on a retreat in the Sierra Nevada Mountains and again asking Jesus be in my heart and to forgive me of my sins.
Also, when I was 13, I was walking down an alley on my way home from a store one afternoon when an elderly lady stopped me to talk.  I was always taught to respect my elders, so I listened to her.

She asked about my family and if I were the oldest son, and then she began to speak over my life how the eldest son is to be given and dedicated to the Lord and His service, and how I would be a minister one day!  This was new to me, and I thanked her but didn't tell anyone about it.
Not long after that, my brothers and some friends and I were swimming in a lake near our home.  There were reeds in the lake and through the root systems of the weeds there were underwater tunnels.  One of my friends swam through the reeds and came up on the other side and so I thought I would try.

Somehow I got turned around in the tunnels and could not find the opening on the other side.  I started to run out of air, and almost started to panic, when a still small voice told me to "Go back the same way you came in."  I began to push myself backwards and shortly my feet hit someone's legs, and I popped out of the water.  My friends were pretty worried and were ready to send in a "search party" for me! I told them what had happened to me and they sort of laughed it off…
Unfortunately, when I was 14, I rebelled.  I was introduced to drugs, and for the next several years of my life I lived for "sex, drugs, and rock and roll."  Even though I was living the wasteful life of a prodigal, there were many times God intervened and spared my life.
Once when I was sixteen, a bunch of us went to dive off a train trestle into the Mokelumne River.  I always loved to do daredevil stuff when I was a kid, so the idea of diving off a 60 foot trestle seemed like a fun thing to do.  The goal was to get out in the middle of the trestle, climb down on some water tanks, and dive into the deepest part of the river.

As I was walking on the trestle to get to the middle of the bridge, someone yelled, "Train!" and I thought they were joking.  I looked behind me, and it was a train!  Without thinking, I dove off the trestle, and landed in about 3-4 feet of water.  Fortunately, when I hit, I balled up, and I was not hurt badly.  My knees came up and hit my mouth so I got a bloody lip, but that was it.
Over the years, there have many times that I can see God's hand of protection in my life.  My mother told me that when I was 16 days old, I was dying, and she prayed to God if He would let me live, she would give me to him.

I sat down one time and tried to think of all the times that I know God spared my life. I was amazed at how many times He had intervened in obvious ways. He is so faithful - even if we are faithless - He cannot deny Himself...
By the time I was in my twenties, I was searching.  I moved back to Iowa via California and Texas, and moved in with the girl (Sue) who eventually became my wife.  With the Lord's help, we will celebrate our 31st wedding anniversary in March!
I had come back to Iowa, but I had no peace.
When I was in Texas, Sue and I would talk on the telephone about the end times.  We had both read a book about the end times (even though neither of us were following Jesus), and we were convinced that the antichrist was just around the corner.  We thought about how we could move to a remote wilderness and live off the land…  Even though neither of us were living our lives for the Lord, He used the "end times" to draw us to Him.  In fact, Sue had asked her mother for a bible one Christmas, and the first book she started reading was Revelation!
So I was back in Iowa, but I had no peace.  So I started searching for something to fill the "God-shaped vacuum" in my life.  I thought I was searching for "truth."
In my pursuit, I began reading books on the occult and eastern religions, things that we now call "new age" material. People may call it the "new age," but it's the same old lie!  The same lie the serpent used to deceive Eve; "Ye shall be like God…" With new age teaching, people try to become like God, or attain a knowledge of God apart from blood of the Lord Jesus Christ!
So, I was reading all these books on astral projection, transcendental meditation, books by people who have familiar spirits, I even looked at a book on satanism.
Most of these books talk about Jesus; How He was a "good man," a "prophet," a "messiah," but none of them recognized Him for who He really is. He is only begotten Son of God, God the Son!

Many of those books talked about becoming "divine," or like "Christ."  I even read part of one book that said that Jesus had to be reincarnated 27 times to become perfect!  The fellow who said that supposedly had read through the bible once for every year he lived and was a Sunday school teacher. What deception!
One night I was invited to hear a Christian singing and drama group at a local church and I went.  After the presentation, one of the men in the group began to talk to me about the Lord.

He asked me, "What is your relationship to God?" I told him I thought it was good, but I wasn't sure if Jesus was his son.  In other words, I did not really have a relationship with God because Jesus said, "I am the Way, the Truth, and the Life. No one comes to the Father, except through Me." John 14:6... 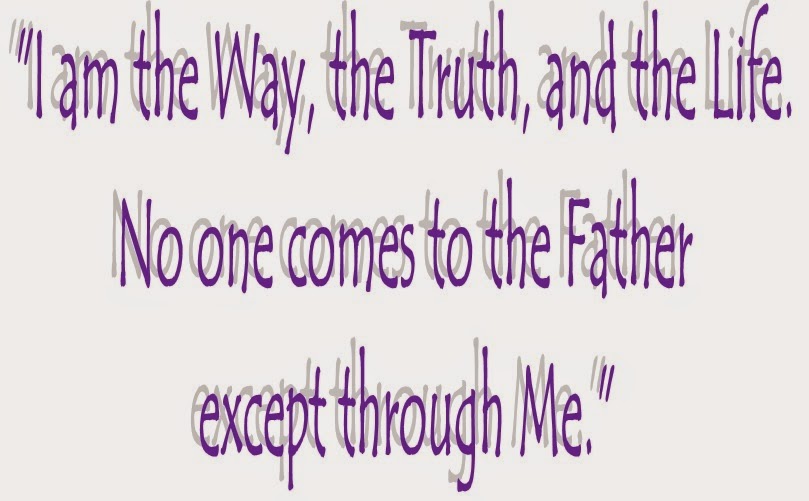 The young man showed me some scriptures and wanted me to pray with him, but I was too full of pride.  I would not do it.

I told him, "I'll go home and ask the Lord to show me the truth," and I meant it.
When I got to the apartment, Sue was sleeping, and I lay in bed and began to cry out to God.

"God, you've got to show me the truth.  If Jesus is Your Son, Who do I worship, Who do I pray to?"  I began to weep, and I was laying on my back, but suddenly I heard a voice the voice sounded like it was behind me that said,

When I heard the voice (not audibly, mind you, but a still small voice), several things happened at once: A wave of love, and joy, and peace sort of went "Whoosh!" right over me; and at the same moment, I could see in my mind, Jesus on the cross.  And I realized at that moment, that He was God, come in the form of man, and that He had died for my sins. And not only mine, but for the sins of everyone in the world!
I simply prayed, "Lord, take over my life," and He did!
The next morning, Sue asked me what had happened to me because something was different about me.  I had peace!  In my searching, I had come across a bible tract ministry next to a printer's shop, and I walked in and asked what bible tracts were.  The lady handed me a bundle of tracts and sent me on my way.

When Sue asked me what happened, I gave her a bible tract and told her to read it and pray the prayer on the back of it.  She went into the bedroom, shut the door, knelt down, read the tract, and prayed to received the Lord!
A few months later, we both received the baptism of the Holy Spirit, and were both later baptized in water… God is good!