Daniel and his Three Friends

I love the book of Daniel in the Old Testament. To me, Daniel and his friends, Hananiah, Mishael, and Azariah, (Shadrach, Meshach, and Abed-Nego) are excellent examples of men who maintained their faith and integrity in the midst of a perverse and wicked generation.


Nebuchadnezzar was a Babylonian king who captured Jerusalem when kings "who did evil in the sight of the Lord" seemed to be the norm...


He took some of the children of Israel, some of king Jehoiakim’s descendants, and some of the nobles (Israel's brightest and best looking young men) to "retrain" them in the ways of the Chaldeans.  Daniel and his friends were among them.


Daniel first distinguishes himself and his companions when he asks to not be fed the king's food or drink the king's drink - just veggies and H2O for 10 days. And it worked!


At the end of 10 days, Daniel and his friends looked healthier than the other young men. So the king's eunuch changed the meals for all.


They all got to eat veggies and drink water. I'm guessing Daniel might not have been real popular with any carnivorous friends at that point. But I digress.


God gives Daniel the ability to understand and interpret dreams and visions. Which comes in handy when King Neb gets stressed out about a dream that none if his magicians or sooth sayers can interpret, much less tell him what the dream was (which is what he commands them to do). When they cannot, he decides the best thing to do is kill them all.


Fortunately, Daniel and his friends pray, God answers, the dream is interpreted, King Neb is satisfied, and they all get to keep their heads.  Not only that, but Daniel is promoted with wealth and status, and he even gets great jobs for his three friends!


The in Daniel chapter three, King Neb then sets up a large golden image (some scholars believe it was of himself) that all the people are to bow to and worship whenever they hear music playing.


Being Jewish means that Daniel's three friends cannot bow and worship any graven image, and especially not an image of a heathen king!


They are accused of not bowing to the idol, and are brought before the king to see if they will obey. He tells them he will cast them into a fiery furnace if they do not bow.


Their reply is incredibly bold, not arrogant, just bold.  "If that is the case, our God whom we serve is able to deliver us from the burning fiery furnace, and He will deliver us from your hand, O king.  But if not, let it be known to you, O king, that we do not serve your gods, nor will we worship the gold image which you have set up.”


Did you catch that? They believed that God was able to deliver them from the fiery furnace, BUT even if He didn't, they were not going to bow!


I love reading about that kind of faith!


It reminds me of how countless Christians have stood strong in the faith of the Lord Jesus Christ, and even when facing death, refused to bow to the idols if this world; they refused to deny the One who gave up His life for them. Many of them became martyrs, but refused this world's ways. If you are interested in reading some of their stories, Foxes Book of Martyrs is a good place to start.


In our day, I think of Pastor Saeed Abendini, who is an American pastor in prison in Iran. His crime? He is a Christian. He has been threatened with death, beaten, and dumped in the worst hell-hole of a prison you can imagine. Yet he will not bow. He will not deny his faith. May God deliver him soon to be with his wife and children here in the States.


When Rack, Shack, and Benny (thanks Veggie Tales®)tell the king they will not bow, he is furious! He commands them to be bound and the furnace to be heated seven times hotter than usual. In fact, it is so hot that the soldiers who throw Shadrach, Meshach, and Abed-Nego into the fire are burned to death!


Suddenly the king looks and declares “Look! ...I see four men loose, walking in the midst of the fire; and they are not hurt, and the form of the fourth is like the Son of God.” Daniel 3:25 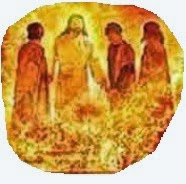 He calls them to come out of the furnace, and is amazed. "And the satraps, administrators, governors, and the king’s counselors gathered together, and they saw these men on whose bodies the fire had no power; the hair of their head was not singed nor were their garments affected, and the smell of fire was not on them." Daniel 3:27


Not only did God show up with the in the fiery furnace as the "Fourth Man," but the ropes that bound them were burned up, their hair wasn't singed, and the clothes they were wearing didn't even smell like smoke! When God delivers, He does it completely!


If you are going through a trial, or your faith is being challenged, remember that God is more than able to deliver you.  He will loose you in the midst of the fire, and Jesus will be that fourth man for you!  You will come through this, and people will be amazed because your clothes and hair will not even smell like smoke.


Well, King Nebuchadnezzar is pretty impressed by all of this and not only calls the men out, but he makes a decree, "That any people, nation, or language which speaks anything amiss against the God of Shadrach, Meshach, and Abed-Nego shall be cut in pieces, and their houses shall be made an ash heap; because there is no other God who can deliver like this.”  That may seem pretty sever, but King Neb was definitely impressed by the God who delivers from the fiery furnace!


God turned their situation around and changed the heart of a king in a moment.  All it took was a miracle!


God can turn your situation around as well.


Whatever you are going through, whether it is illness, or lack, or not feeling loved, or anything at all, God can change it.  He wants to change it.  He will change it.    He has not changed His mind about you.  He has set His love upon you and will not change His mind.  His gifts and His callings are without repentance...


"For God’s gifts and His call are irrevocable. [He never withdraws them when once they are given, and He does not change His mind about those to whom He gives His grace or to whom He sends His call.]  Romans 11:29  Amplified


Look to Him today.  Whatever your need, He is more than enough.  He will not let you down and will not turn away from you.  Trust Him.